It’s been awhile since I’ve posted: there have been Things (TM) with which I have had to deal (and as with most Things they are Not Without Ordeal), but I now find myself with some time to return to sharing what I find interesting and fascinating and just plain cool with you, such as my planned series on All Things Owl.

Or so I thought. If you’ve been on Twitter during the last couple of days, you may have been exposed to Discovery Channel’s latest promo. I link it here for your review.

Did you notice anything? More specifically, what did you not notice? If your answer was “Hey, that promo seems to feature only dudes,” then you noticed what many of my science and science communicator colleagues have noticed: Discovery is A-OK with only men (and predominantly white men) saying that #TheWorldIsOurs.

The initial reaction was for people to point out to Discovery that there are MANY people in the sciences other than mostly white men (who were doing very little science in that promo, let’s be honest) that could be featured and promoted by Discovery if they so choose.

This has happened before. A large platform company like Discovery promotes a very narrow view of who is A Science/Exploration Authority, and we in the actual science community respond by sharing and promoting who we think should be promoted for a change. However, we end up repeating the same cycle anywhere from six months to a year later when the next promotion comes around, and during all of that time we don’t see any noticeable change in who Discovery and similar large platforms choose to deliver their content.

Nothing seems to change.

This is where this morning’s Twitter thread comes into play. I noticed that there have been a few comments with regards to the Dudescovery promotion along these lines:

LRT: Thankfully I haven’t seen too many comments of “Gee, if you want to see more underrepresented people in science on TV etc, just make your own videos and make it happen!” wrt the Dudescovery promo, but I have seen a couple. Let’s look at some issues with that line of thought.

There are several glaring issues with this theme of comment, and because of these issues, we will continue to see Dudescovery promotions from large platforms.

1. We’re already doing it, and have been for YEARS.
If you haven’t noticed, it’s not bc people haven’t been putting out their own content: it’s that the content they produce isn’t promoted or sought out by Big Platforms. Who you highlight – or don’t highlight – speaks volumes.

If you have not noticed or have not been exposed to science communication content created and delivered by people underrepresented on the big platforms that is both educational and entertaining, it is not because that content does not exist. Quite the contrary. Scientists and science communicators from underrepresented groups have been creating this content for years. If you, someone who the large communication platforms want to attract as viewers, haven’t seen this content it is not because it does not exist. It is because large communication platforms like Discovery Channel choose not to promote or elevate this content. It’s not an accident or an oversight (how can it be simply a matter of oversight when they are reminded each and every time they make these apparent oopsies?) It’s a choice.

2. Underrepresented Groups in STEM (Science, Technology, Engineering, Mathematics) Are Still Expected to Fix Problems They Did Not Create.

The “just make your own content” comments place the burden of fixing representation on large communication platforms on the very people who are already not being promoted or supported by these platforms.

2. Underrepresented groups in STEM are STILL expected to fix problems they absolutely did not create.

Yes, this is about who we as a society have been conditioned to view as experts because historically those were the people who set up the system & who has power in it.

Large platforms have, for decades, promoted who they view as An Authority on their programs. These platforms have a long reach. We as the public have, for years, been conditioned to have a very narrow view of who we view and respect as An Authority. It’s no coincidence that the Venn Diagram of “Who Is Traditionally Viewed As An Authority” and “Who Were The People Who Set Up the Foundation of Our Current Science System” is basically a large white circle. 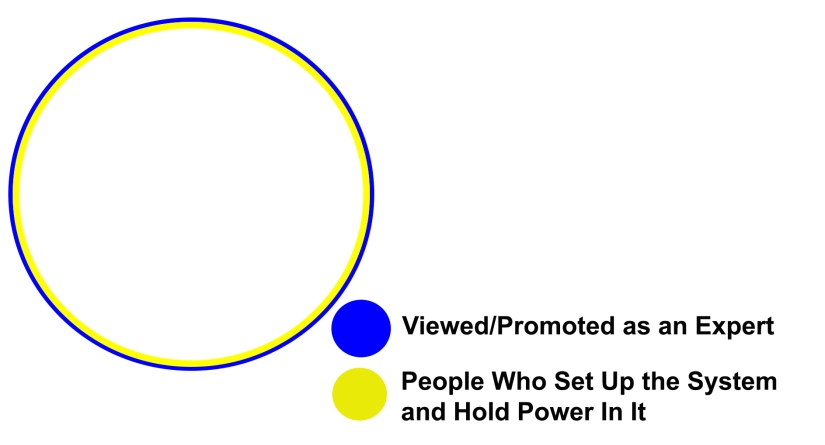 Who Discovery chose to promote in their Dudescovery promotion was no coincidence. The Adventure Scientist Explorer trope (think Indiana Jones) has been promoted for decades by these platforms. Exploration as we know it, and as we have it portrayed to us by media, is rooted in Western European colonialist idealism. We still have this idealism portrayed by large communication platforms, and the public accepts this because it’s what we’ve been taught is normal. It is not.

Who sets up the system sets up who the public sees as the experts. But who exactly is The Public to these large Discovery-level platforms?

3. Big Platforms don’t see the entire public as their public.
The Big Platforms are providing visible experts that a very specific part of the population can relate to, can see themselves in or as similar to. It’s people like them. They think of their base AS THE BASIS.

Discovery-esque platforms speak to what and who they know, and who they know are people exactly like them. Those are the people they relate to, so they treat their narrow view of what their audience is as the Standard. Anything that does not conform to this standard is Other, and therefore not their concern. They are A-OK alienating the rest of the population because their narrow view of who their target audience is doesn’t complain.

To then say “Make your own content” is telling underrepresented groups to fix this problem on their own after being told for years “Oh sorry, there’s just no appetite for that kind of content.”

Which brings me to the fourth point.

4. Underrepresented Groups Are Expected to Fix This Problem For Free.

“Just do it yourself” comments are blatantly ill-informed on how much darn work it takes to do a Discovery-style version of science communication. The science-exploration hosts we see promoted by Discovery-style platforms are supported with resources, people, and money. However, underrepresented people are expected to do the same level of work in the absence of such support. This brings us to the fifth point…

5. Underrepresented Groups Are Still Expected to “Prove Themselves” and “Prove That They Belong.”

How often have we heard some version of “Oh, if there’s an appetite for seeing X as an expert, they’ll create their own following AND THEN they’ll get noticed!” This is pretty steep coming from platforms that are set up to create followings for the people they choose to promote.

I find this “prove yourself” mentality quite distasteful: it reeks of “separate yet equal” nonsense that should have been discarded in the rubbish bin decades ago. The “just do it yourself” people are – whether they know it or not – supporting the message sent by large platforms to the rest of the science communication world. That message is “Make your own following because we don’t value or respect who you speak to and who you represent.”

This is a system that brings us to the sixth point…

Not only are underrepresented creators expected to do the work of large platform hosts with no support from the platforms they do have access to, such as blogs and YouTube for dealing with abuse.

Anything that is perceived as different from what the large platforms have promoted – and given their stamp of approval to – is treated as “politics” or a “stunt.” It’s not viewed as what it really is, which is an attempt to address the cavernous void of who is not represented by these platforms. The public has been taught to NOT respect the non-platform experts. For example: have you ever read YouTube comments on videos created by and featuring women? That’s a symptom of a systemic problem of who the public has been taught to respect as an expert.

So rather than placing the burden of increasing visibility on those who are systematically not supported by Big Platforms, do the world a favor and demand that the Big Platforms change. Promote creators you respect to them – they’re already there. Be consistent and persistent. Squeak that wheel. Squeak it with your voice and your wallet. Show them that who speaks for science and discovery matters to you.

I'm a vertebrate paleontologist who studies the footprints and other traces of Cretaceous-age birds and dinosaurs. I am active on social media with Bird Glamour, a science communication project where I get people interested and excited about birds using everyday cosmetics! View all posts by lisagbuckley

Part of the Science Borealis Community!